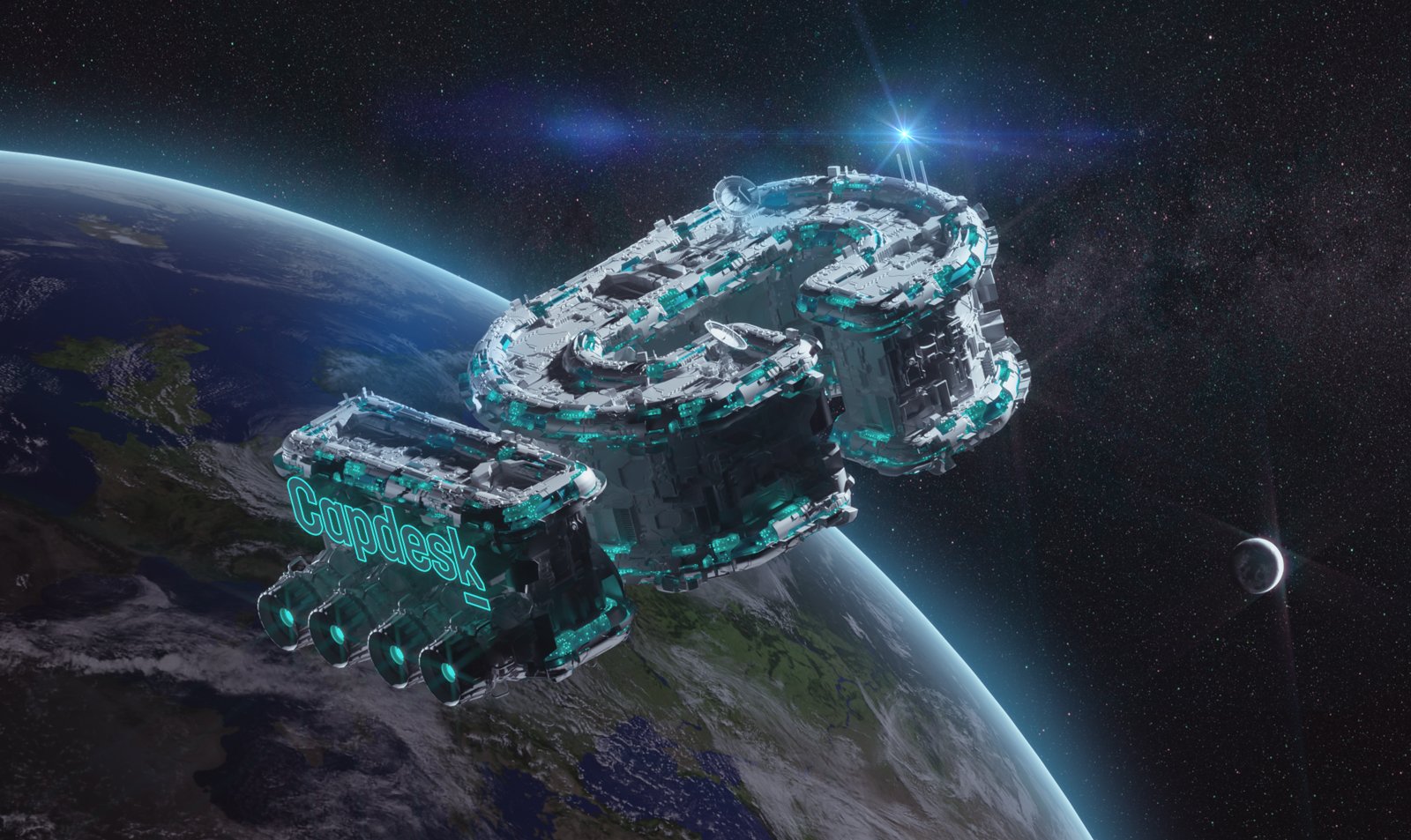 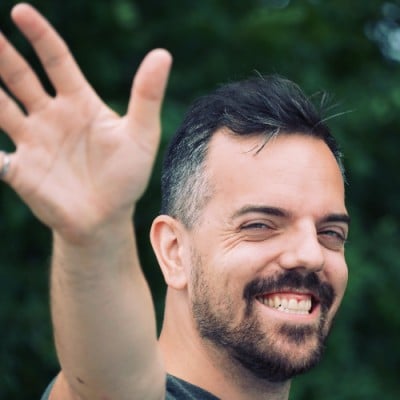 I’m Guillaume, new(ish) joiner and Tech Lead at Capdesk. From the moment I first came across my new employer, I began noticing remarkable things about the company. In this article I want to share my initial impression of Capdesk, and give others a firsthand insight into the experience of joining.

I’m happy to report that it’s been an overwhelmingly positive journey, and so many of my high expectations are already being met. There were four important observations I made about Capdesk which swung my decision and could well do the same for you. I haven’t come across these things often, and rarely all together, which is why they deserve to be shouted about.

So, here’s why I joined Capdesk – and so should you:

It was when I first spoke to Co-Founder and CTO Mikkel that I realised there was an unusual mindset at play in the business: a ‘yes-first’ mentality. It seems at Capdesk, the instinctive reaction to new ideas is a simple ‘yes’, followed by the question of how to make it work. There’s a willingness to leap into the unknown together, to conduct experiments with an optimistic outlook.

It turns out it wasn’t just Mikkel. Speaking with Christian, Kartik, Scarlett, Dave and Nikki I saw the same thing. The first time I spoke to each of these people, they put forward ideas for us to drive together.

The biggest surprise came from our finance team. I assumed that, as is the case in many organisations, I would need to fight for budget, make bullet-proof proposals and defend the success or failure of my initiatives endlessly. But with Capdesk’s new CFO Greg, none of that has been necessary. His open-mindedness means I can go to him with rough ideas for us to shape together.

The broader implications of this are huge. I don’t have to spend energy fighting for my projects, which gives me back the time (and emotional bandwidth) to focus on more projects. 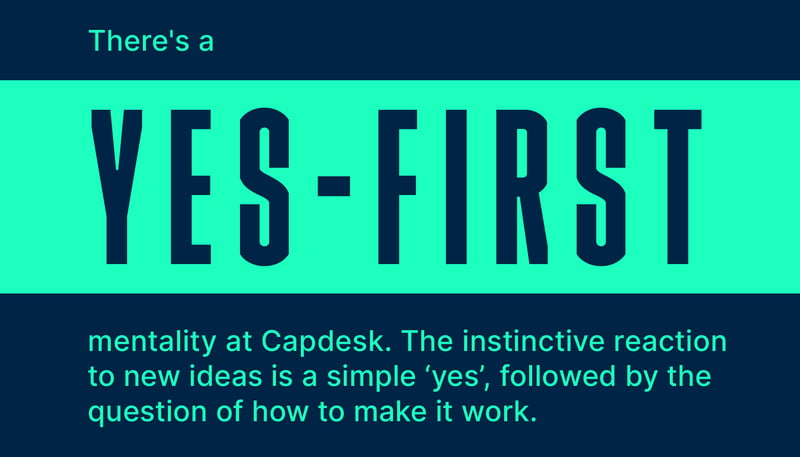 2. The way aspirations are encouraged

To be clear: a yes-first mentality isn’t the same as naïveté. Capdesk is a refreshingly honest workplace, lacking that strange mythology that successful startups can sometimes take on. When I first interviewed with the co-founders I was upfront about my own long-term ambitions. I’d like to start my own business in the not-too-distant future, which isn’t something most prospective employees want to hear.

But Mikkel and Martin responded positively to my openness. Right away they encouraged my aspirations, wondering (out loud) how Capdesk could provide the important learning opportunities I sought. As of right now, how things will actually play out is almost beside the point. The crucial thing was the instinct of the leadership team: to accommodate, not restrict, my goals.

Having long-term career intentions is the norm, so why is talking about them so rare? The charade of convincing your prospective boss you want to work with them for the next decade is so outdated. There’s no benefit to the flattering stories that most companies like to tell themselves and their employees.

Capdesk is firmly realistic about things: I may still be here in five years, but I may well not. Either way, the company intends to make the time I spend here enjoyable and rewarding.

Sure, good colleagues are important to most, but I’m particularly fussy when it comes to the people I work alongside. Even as a fully remote employee working across the Atlantic from my colleagues, I became close friends with many people at my last company. I needed to know that the same would be possible at Capdesk.

During the interview process I had the chance to speak informally with more than eight Capdeskers, and it was those conversations that made my final decision easy. I immediately sensed the team was an honest bunch, ready to acknowledge their own limitations without defensiveness or pride.

Another way I’ve gotten to know the wider team since then is at biweekly virtual socials. The enthusiastic and supportive atmosphere on those video calls is infectious. It immediately told me I’d made the right decision in joining Capdesk. 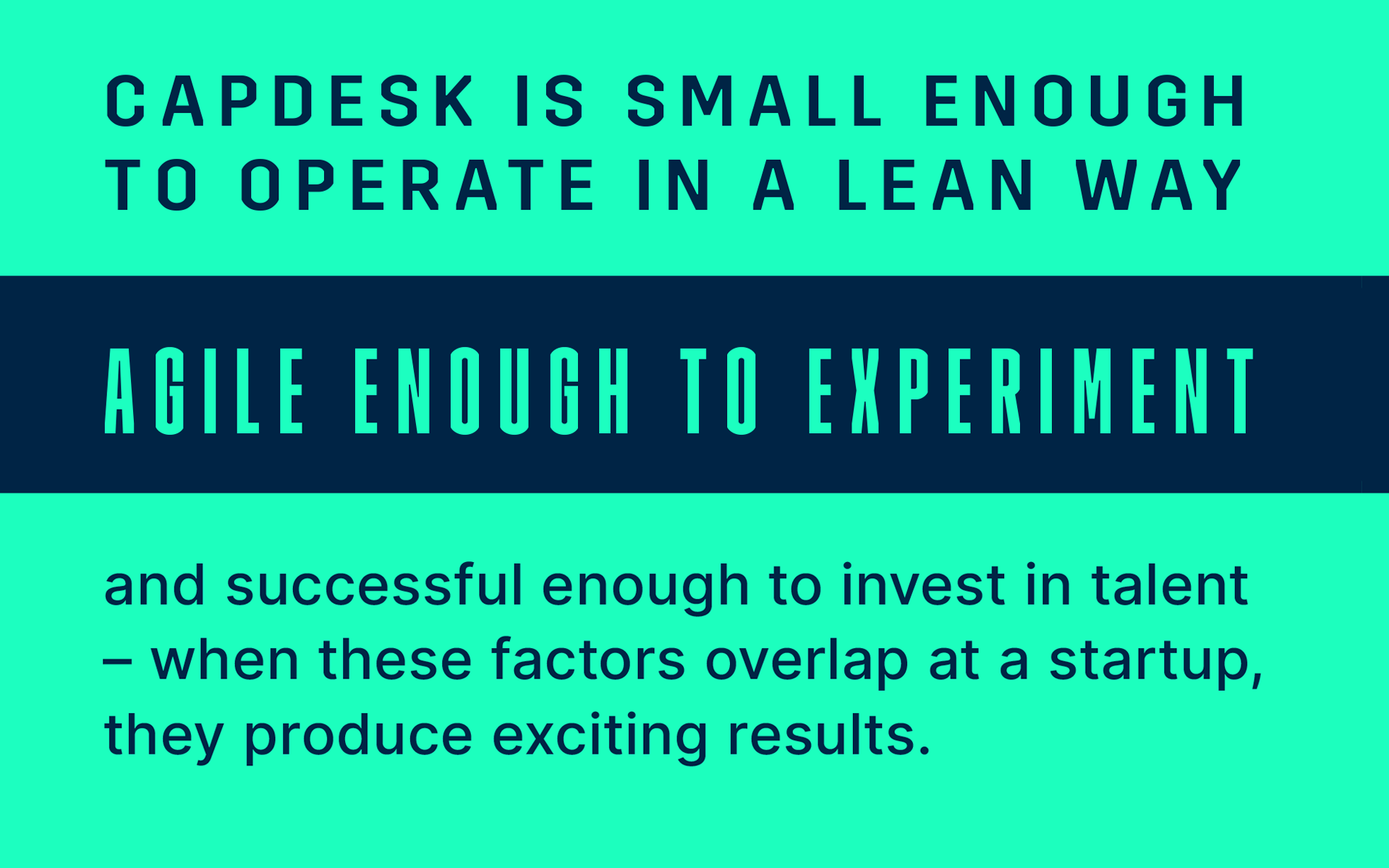 4. The balance of independence and collaboration

Right now, Capdesk is at an exciting point. Small enough to operate in a lean way, agile enough to have room for experimentation, yet successful enough to invest in specialised talent – these factors don’t always overlap in a startup’s trajectory, but when they do, they produce unique results.

The team is made up of experienced individuals who can strategise and plan at a top level but are equally willing to roll up their sleeves and execute. Everyone is keen to collaborate and provide perspective on each other’s projects. I like working with people who have done experiments, made mistakes and owned them. Surrounding myself with people that are different helps me find new ways to improve.

When it comes to expanding the tech team at Capdesk, I’m looking for team players who will raise the bar and set a new high standard. There’s an opportunity to make a significant, measurable impact pretty quickly – the right person will be excited by that prospect.

So, there you have it – the four reasons I joined Capdesk. I won’t pretend that Capdesk is some kind of Mecca, where every employee will find happiness. The truth is, it isn’t for everybody – some people prefer the anonymity of larger teams, the comfort of process, the reliability of strategy set by the senior management team – and that’s absolutely fine. But to those with an entrepreneurial streak and a desire to make a splash: it could be the best move you ever make.