On Wednesday 28th October, Capdesk and The Startup CFO Network co-hosted an exciting webinar for finance leaders. Moderated by Shane Leonard, a panel of experts shared their lessons learned while steering early-stage businesses through rapid growth.

The audience heard from panellists Zoe Wong, Matt Hann, Joe Adams and Aarish Shah on a range of topics from shifting to a profit-first mindset to fundraising as a business scales. Here’s a summary of the conversation:

The startup to scale-up epiphany

I realised we’d gone from startup to scale-up on the day I had to stop explaining what Depop was when meeting strangers. There was a point when people outside of the industry started to recognise the name and the business.

As we got bigger we had to think about the consequences of our actions outside the Depop bubble, such as social impact. Because 90% of our users are under 25, our obligations are moral as well as legal. We introduced a policy escalation team, which considers the wider world impact of our work.

There wasn’t necessarily a single moment for Festicket. As a startup we already had proven revenue streams and strategic plans, and we were managing a complex cap table and large funding rounds. But as we scaled up, decision-making became much more difficult because it suddenly affected a very complex business structure.

Compare a growing startup to a football club. As a football club, you move up one division at a time and each move presents greater opportunities such as bigger crowds or more sponsorship. You know what the new league will offer and you choose where to invest. Rapid growth in a startup is like jumping straight from Division One to the Premier League. You’ve suddenly got a whole host of opportunities and challenges, without the time to prepare for them strategically. 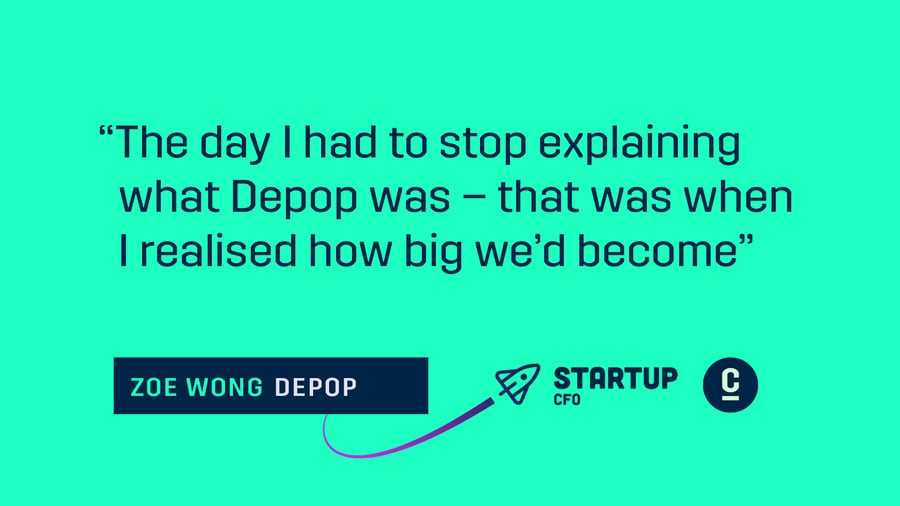 The shift from growth to profitability

Before I joined Festicket, the team was focused on a single figure: gross booking value. It’s been my job to change the mindset of the company to consider things more broadly. As a finance team we go further now in explaining things to our staff to get them invested. It’s been encouraging to see people’s appetite to learn these things, which has helped us shift how we judge ourselves and how we judge success.

We’ve also developed tools and built out reporting and analytics so staff can monitor their own key metrics and understand performance. It took a while but I’m proud of the progress. It was a cultural shift, and you can’t make that happen overnight.

It’s interesting to hear it described as a cultural shift, but that is what it is. Because Depop is a community-driven business, prioritising profit can be seen internally as unethical – so even as we switched gears we had to avoid some of the most obvious profit-generating opportunities.

There were occasions where we could have partnered with fast-fashion brands, but decided it was at odds with our values, and thank god we did. Sometimes profit can be a distraction from making sound business decisions. You can use profit as a force for good, so long as you don’t go for everything that’s on the table.

Adapting to growth as a leader

As a company scales, the biggest challenge for leaders tends to be letting go. They have to start delegating and handing over. Within finance, hiring the right financial controller is crucial. I’ve been lucky enough to hire people with lots of expertise, but who still want to muck in and get hands-on experience.

The best tech decision I ever made was hiring a head of data. That was a game-changer which I’d absolutely recommend to a scaling company.

The smartest founders understand their limitations and bring great people in to support their teams. But as Joe says, not letting go or reverting to micromanagement is where they fall down most often. You need to have humility to hire people smarter than you. 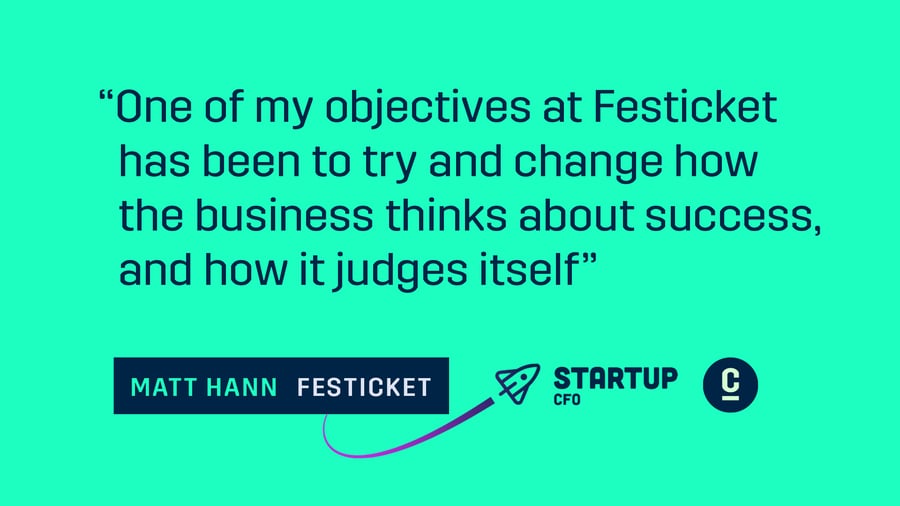 Fundraising as a scale-up

Prior to Depop I had no fundraising experience – I came from a corporate background – and that was a fear of mine. I was doing a lot of secret Googling in my first three months! But if you have the right mindset to learn, you’ll be okay.

Being able to admit not understanding something is important, and whenever I’ve done that I’ve been given the solution or pointed towards someone who can advise me. Over time, that’s helped me build a really valuable network.

As Festicket grew, our fundraising process changed. Investors in the scale-up space are very different. Because the investments are typically much bigger, they are fewer and further between. Investors are making sophisticated bets on which businesses will make it to the next stage, so they are more scrutinising.

The big themes in our fundraising were revenue streams, path to profitability and unit economics. We shifted away from TAM (total available market) and towards the fundamentals of how the business operates. Investors are focused on the plan of execution, and trying to find sufficient evidence that their money will lead to results.

EmergeONE provides outsourced finance support to growing companies, and often it’s the first time they’re receiving CFO-level fundraising advice. In some circumstances getting investment is easy, because the business model is simple to explain and maps against another company’s journey. But it can be much more complicated than that.

Fundraising is a sales role, not a finance role. You have to sell your business externally, and look outwards and forwards. The due diligence requirements can be ginormous too – that always surprises leaders who’ve only been through friends and family or angel rounds so far.

Scale-ups in the UK do profitability better than America. Over there, companies focus on growth for far longer before worrying about profit – just think of WeWork. The Index Ventures report shows that the US does equity better than the UK. Option pools are twice as big as in the UK, and until companies are 200+ people every employee gets shares. Employees also tend to be better educated about equity. These trends are just beginning to spread to the UK, but we’ve got a way to go.

There’s a gap in the UK market for investments in the £15-30 million bracket. There’s lots of data showing the gap between UK and US investors. When you compare UK-only funding rounds with rounds that include foreign investments – a high proportion of which are US investors – the average total increases from £2 million to £14 million. That’s why UK companies focus on profit and market share instead of chasing a £5 billion valuation. They just don’t have the access to freely available capital or investors who are used to writing large cheques. 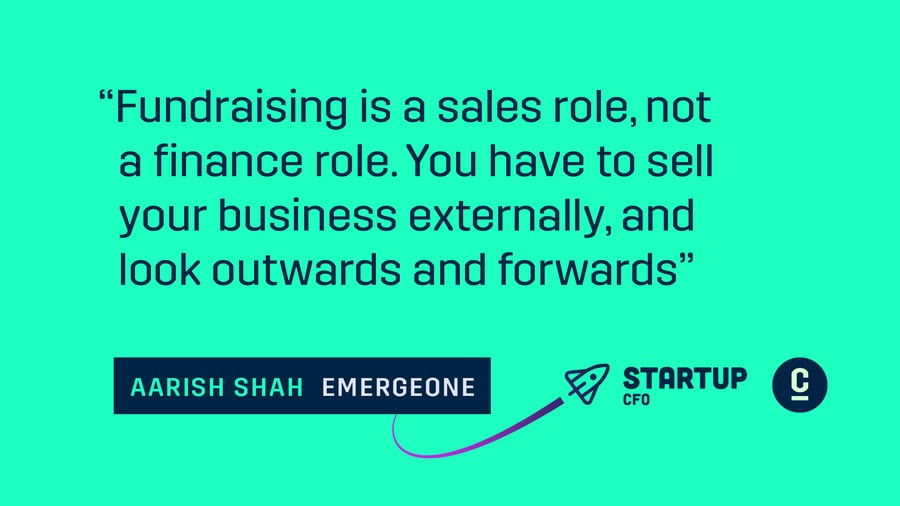 A business loses autonomy as it grows. Founders typically love the discovery phase right at the beginning of a company, when there’s the freedom to experiment and explore. Not all founders make good scale-up CEOs, but the best ones recognise that and act upon it.

In the early days of Depop there was a feeling of “this is ours”, a sense of ownership in the business. When we did a rebrand, a group of us came into the office to paint the walls in the new brand colour.

When you’re a company of 20-40 people, you’re all under one roof, hustling and working late to meet the same goals. That sense of camaraderie is fantastic, and something you can’t get back.

Thanks to our excellent moderator and four panellists for their contribution to the webinar.
For more information on the Startup CFO Forum, and to join, go to www.startupcfo.tech

Previous story
Gary Dolman’s lessons in growth, from life as Monzo’s CFO
Next story
Delivering the A round – experts cover every angle

Equity alone is not enough: employees need clarity, education and ...