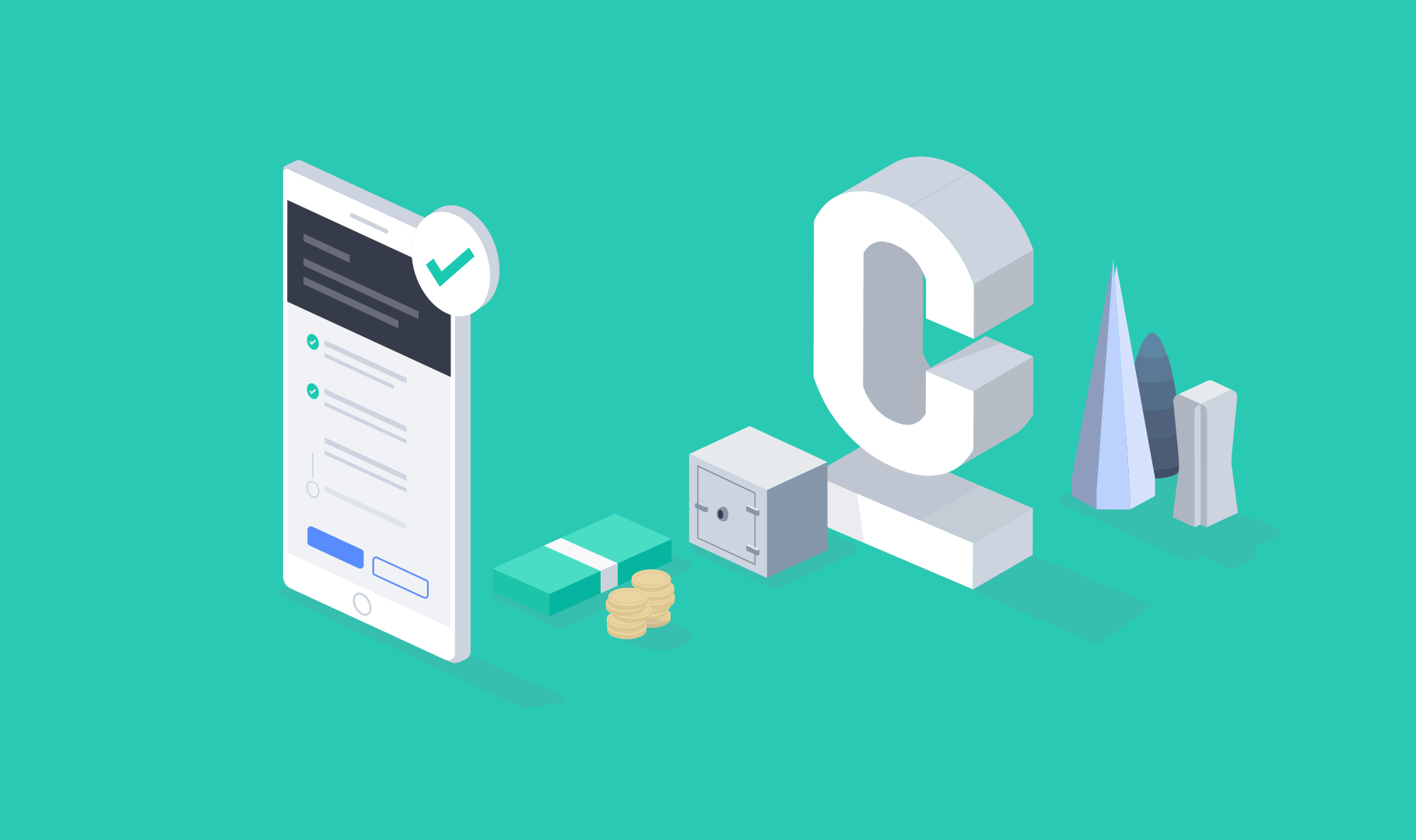 There’s a lot of talk about the startup ecosystem, where challenger businesses shun traditional service-providers – from banks to offices – in favour of supporting other startups disrupting those industries. In this way, startups are able to advance each other’s mission and show their commitment to change and progress. Of course, the startups in question have to provide an alternative that’s genuinely better than the big businesses they’re competing with – but when they do, the ecosystem really proves its worth.

The relationship between Capdesk and Shieldpay is one such example. Shieldpay, which provides digital payment services to a range of companies, was an early Capdesk customer, choosing the platform to digitally manage its equity back in 2017. And then in July of 2019, when Capdesk was seeking a paying agent to support secondary transactions via the platform, we selected Shieldpay over its competitors.

Being both a customer and a service-provider to Capdesk gives Shieldpay a unique perspective on our business. Geoff Dunnett, the company’s Professional Services Director, spoke to us about his experience using the platform.

Shieldpay joined Capdesk in the middle of 2017, after being introduced to the company by one of the Co-Founders, Caspar Arboll.

“We initially saw the platform as a simple solution for one of our needs at the time: somewhere to document all information relevant to shareholders, which simultaneously functioned as a portal for stakeholders to manage their equity. That said, we also joined with employee share options in mind, which Capdesk was about to launch at the time.” 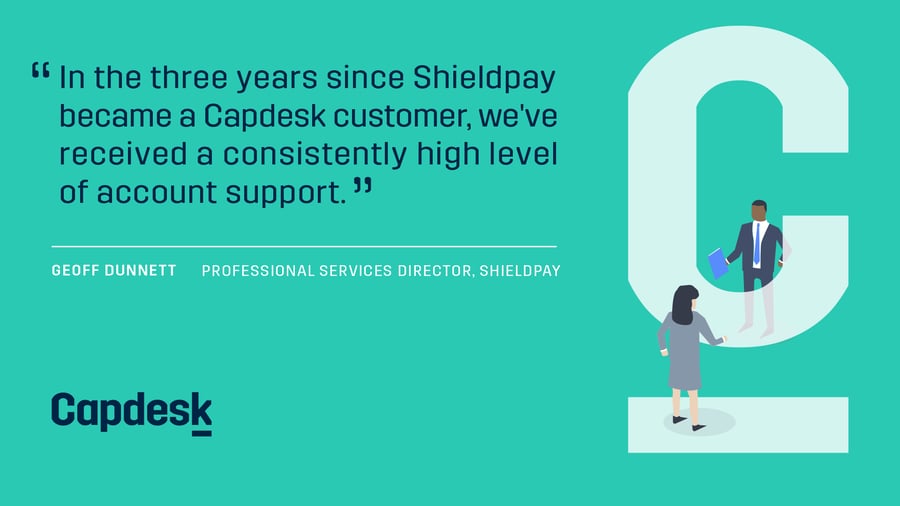 Today Shieldpay uses Capdesk for a range of things, including managing an EMI options scheme. When Geoff’s team wanted to make changes to the standard options agreement, they were met with hands-on support from Capdesk.

“Adapting Shieldpay’s existing option agreement to work with the Capdesk automation was straightforward, and we got plenty of help from Capdesk’s customer success team in the process. We then used the EMI options signing parameters to have our employees sign their agreements.”

But it’s not only employee share schemes that make Capdesk a worthwhile investment for Shieldpay.

“There are lots of other features on Capdesk that make a difference to us. Generating filings for HMRC and Companies House is a time-saver and keeps us on top of important deadlines. We’ve also found the deed-signing tool useful.

“Right now, getting all our existing investors to use the platform is a priority because we’re about to close a convertible note round, and we plan to issue all the associated documents to investors via Capdesk rather than by email.”

Platform plans for the future

There’s plenty more Shieldpay intends to use Capdesk for, such as the investor relations features on the platform. Geoff explained that he’d rather manage something like that through Capdesk than enlist an additional tool, as he’s seen many other companies do. He also mentioned secondary transactions, which are supported by Capdesk’s integration with Shieldpay.

“Secondary transactions may well become Capdesk’s most exciting feature. The collaboration with Seedrs – and now Crowdcube – represents something very interesting, and I believe there’s huge potential there.” 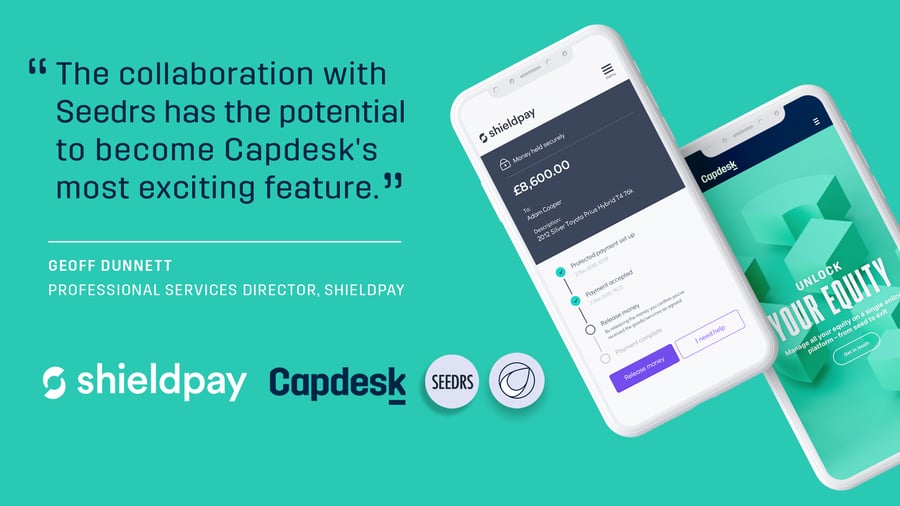 “In the three years since Shieldpay became a Capdesk customer, I can happily say our positive onboarding experience has been mirrored in the ongoing account support we receive. For example, when I prepare an import document using the sample Excel – provided by Capdesk – our dedicated Onboarding Analyst James reviews the file to confirm it’s all accurate before putting it into the system.

“As an enterprise client, getting that level of service for us is really useful. In those rare instances where there might be an issue with the import file that needs correcting, it’s reassuring to know that James will be checking the data as well. Whenever we’ve needed support from Capdesk, we’ve received it promptly.”

Using Capdesk to automate admin-heavy manual tasks has been one of the biggest benefits for Shieldpay, and saved the company considerable time.

“Issuing employee EMI options via Capdesk saved us an hour per issuance. There’s a big difference between manually transposing information onto a pdf 30 times, and uploading a spreadsheet to Capdesk that automatically generates the documents for us and sends them out. That was a real time-saver.

“We also used Capdesk to record all our convertible loan notes, and store the documents on the platform rather than offline. I’d estimate that saved me as much as 15 hours work .”

Scarlett spoke with Geoff Dunnett, Professional Services Director at Shieldpay, in October of 2020.

Previous story
How we hire: the Capdesk method for recruiting exceptional employees
Next story
Gary Dolman’s lessons in growth, from life as Monzo’s CFO

For Secret Escapes, there are some questions only Capdesk can answer

Why Capdesk is an essential tool for iamYiam’s lean setup