How Scandinavian startups are preparing for the post-pandemic business world

European startups have changed drastically over the last two years, from the way they are funded right through to their cultural DNA. Economic forecasts were bleak during the early stages of the crisis, but recent events in the startup sector suggest many smaller businesses are in good health.

In July, it was reported that European startups received three times as much funding during the first half of 2021 as they did over the same period the previous year. At the forefront of this impressive recovery are Nordic startups. In the last six months alone, Pleo became Denmark’s eighth unicorn, a host of smaller startups closed impressive funding rounds and the Swedish startup sector outperformed that of the US in per capita terms.

To consider the effects of the pandemic on startups, Capdesk CEO Christian Gabriel spoke with Ninna Wicki Olsen-Stryhn, an Associate Partner at Rainmaking and Managing Director of The Hub. 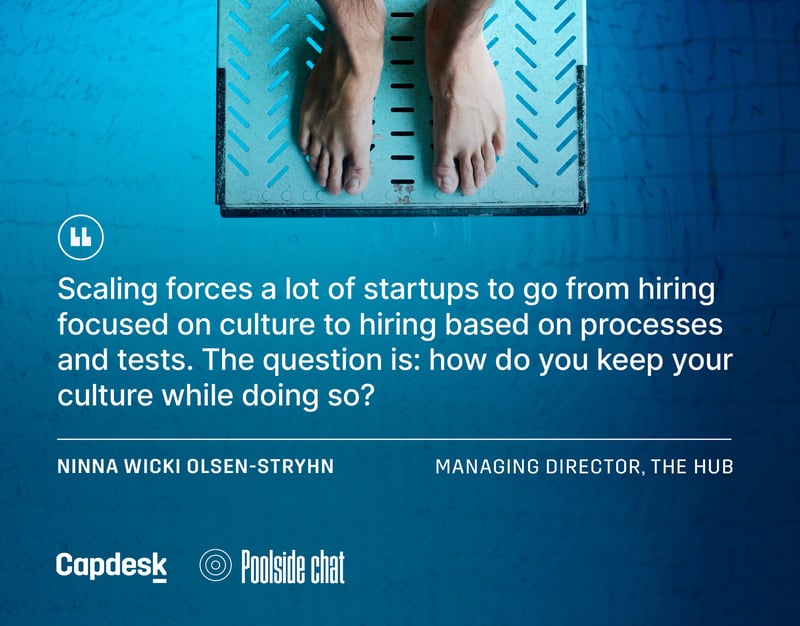 Christian began the discussion by highlighting the paradox of pandemic-era recruitment. “Companies are more geographically restricted than ever, but at the same time, in need of huge numbers of people to join their teams.” He asked Ninna whether this meant more Nordic startups were recruiting locally.

Ninna suggested the opposite was true: remote working solutions were making recruitment more global. “Talent has been requesting remote positions for a long time. They don’t want to just stay in Nordic companies, they want to enter European companies as well.”

For Ninna, this has resulted in a significant culture shift. “It’s not just a small group requesting remote working solutions. We’ve seen that 70% of all talent demands that they’re able to work remotely. Both startups and talent now see remote working as the default, not an additional perk.” 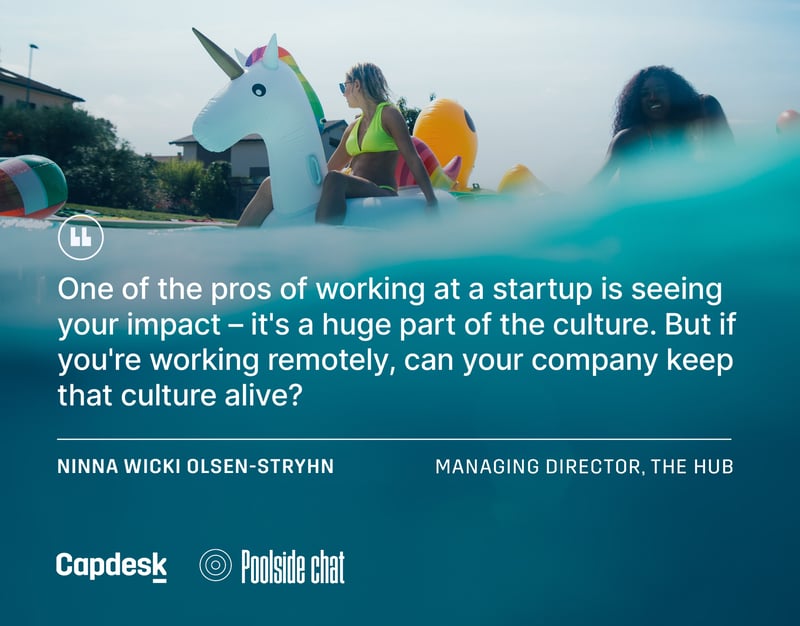 Growing divisions in the startup ecosystem

The discussion then moved on to whether the pandemic had exaggerated the differences between new and well-established startups.

“If you decided to start out in the Nordics or UK last year, you would have seen these giant funding rounds going on,” Christian noted. “Do you feel the gap between late-stage tech and early-stage tech has widened?”

Ninna confirmed that investment over the last two years was weighted in favour of larger startups. “Research shows there have been fewer seed funding rounds. But also that there have never been bigger deals in late-stage investment. Even in the Nordics, which haven’t really seen many unicorns in markets outside of Sweden, there’s been the emergence of several unicorns over the last couple of months.”

While Ninna agreed that there was a widening gap between early-stage and late-stage startups, she pointed out similar splits were emerging elsewhere in the startup ecosystem. Most notably, when it comes to hiring. As startups scale, they often adopt new hiring practices that can fundamentally alter the nature, character and culture of the business.

“There’s a big difference between a business that hires one employee a month and a business that hires 10-20 employees a month. Scaling forces a lot of startups to go from hiring with a real focus on culture to hiring based on processes and tests. But it’s a juggling act. How do you keep your culture while mass hiring and mass scaling?”

The question is even more relevant in today’s remote working environment. “Startups now scale to new markets without having offices set up there. That was a no-go just two years ago. For many people, one of the pros of working at a startup is that you’re not just a small part of the puzzle, you make a difference – it’s a huge part of the culture. But if you’re working remotely, can your company maintain that culture?” 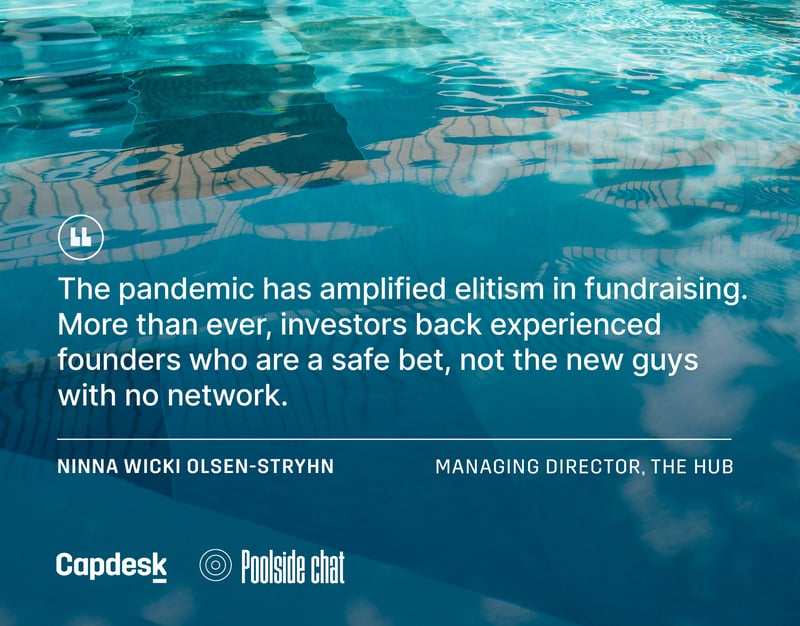 The potential pitfalls of remote working

The impact of remote working isn’t limited to culture. Christian argued that it’s also affecting investment and learning opportunities. “I don’t think we really speak about elitism – the fact that investors back founders who already have experience or who are launching their second startup, not the new guys with no network.”

Christian suggested this opportunity imbalance also manifested itself in people’s attitudes to remote working. “Surveys have shown that under-25s want to go back to the office, 25-35-year-olds want some remote working and over-35s don’t want to go to the office at all. Are the younger generation being denied the opportunities to learn that others had?”

Ninna agreed that there seemed to be a generational gap between those who wanted to return to the office and those that didn’t. To prevent younger employees from missing out on valuable experiences, she argued, alternative learning opportunities must be put in place. “When you’re face-to-face, a lot of things happen randomly. As a remote manager, you need to take a more active role in facilitating learning for your team.”

Christian noted that a preference for remote working solutions wasn’t the only thing that distinguished younger employees from their older colleagues. There had also been a significant change in the way working for a startup was perceived.

This can partly be attributed to recent startup success and an improved understanding of equity, argued Christian. “Equity is becoming a huge thing. All of a sudden, you don’t envy the guy with the big job and the big house, you envy the guy who became a millionaire because his company exited and he had equity as the first developer.”

Taking an international approach pays off

With global recruitment on the mind, Ninna spoke of the need for young startups to take an international approach. “Early-stage startups need to think global at a very early stage. 80% of startups in the Nordics fail because they don’t think globally early enough. If startups don’t think about scaling from the very beginning, they don’t have the muscle power or the know-how to operate outside of their little local market when it comes time to do so.”

Ninna admitted that attracting international investors at an early stage is a big ask. But talent is a different matter entirely. “With talent, you can already think global. It makes a big difference if there’s both a Dane and a Brit on your team from the very beginning. If you’re four guys who went to school together in Denmark that’s great – but you’re biased by experience and locked into the schools of thought you were raised with.”

It’s not just talent that’s going increasingly global. The last year has shown that investors are more willing to make investment decisions remotely, without having met founders in person. However, the jury is still out on whether those remote investments will be as successful as those that were decided on the back of face-to-face meetings.

“Over the coming months and years, investors will look at how the portfolio companies they’ve invested in remotely perform compared to the businesses that they met up with face-to-face. If they’re performing just as well or even better, the data will tell its own story. Why would you move back to something that’s less efficient?”

Investors are eager to part with capital

Towards the end of the discussion, Ninna and Christian offered explanations for why startup investment rebounded so strongly over the last year. “During spring and summer last year,” suggested Ninna, “a lot of investors were very focused on their portfolio. They wanted to invest further in the companies they were already backing, just to keep them going and make sure they survived. It was housekeeping for their portfolios.”

“We also know that the pandemic was not a financial pandemic. The funds available have grown enormous. There’s never been so much capital as there is today. It reached a point for investors where housekeeping wasn’t enough and they had to look for new portfolio companies. Otherwise, they wouldn’t reach their investment KPIs over the coming years.”

Christian also believes SaaS companies benefited from a relatively stable business model. “More money is going into Series A and Series B rounds because the numbers are easier to crunch and make sense of. With SaaS, it’s much simpler to predict than something volatile such as B2C.”

While the future certainly seems brighter than it did 18 months ago, Ninna and Christian’s conversation highlighted many of the tensions present in the startup sector. Whether it’s concern over a lack of opportunities for younger founders and employees or the impact of remote working and rapid growth on company culture, there are challenges to overcome.

At the same time, this is an exciting time for startups. In many ways, Nordic, UK and European startups are better equipped than ever to face these challenges. The recent success of Danish and Swedish startups has been inspirational and is likely to be followed by other exciting companies in the region in the coming years.

10 Tools That Will Change How You Fundraise